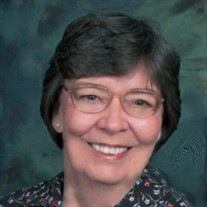 Anna Mae Light Taylor, 86, of Kingston, passed away Wednesday, January 20, 2021, at Autumn Care of Farragut. She was a member of Kingston United Methodist Church and a well-loved and active member of the Kingston community for over 50 years. She was a long-time member of the Kingston Garden Club where her artistic eye and attention to detail won several local and regional flower-arranging awards. She was an active volunteer, and a talented homemaker known for her cream puffs, her crafts, and for sewing beautiful clothing for herself and her family. Anna was heavily involved in the Kingston Children’s Theater and the Kingston Community Theater for many years as a director, make-up artist, set designer, and board member – everything except being on stage, which she adamantly refused to do! She and Oscar also enjoyed square dancing. She was very proud of being a part of the volunteer team that created the first library at Cherokee Elementary School in the 1960s, and she spent many hours volunteering and helping operate the library. She was a girl scout leader for several years. Anna helped operate a “clothes closet” in the Greenwood area of Kingston, and later helped develop and operate the Clothes Closet at Kingston United Methodist Church. She was also a former member of the Annakeusa Junior Women’s Club and various bridge groups. Anna was a graduate of Central High School in Knoxville, and she went to work for Great Atlantic Shoe Company upon graduation, where she met her future husband, Oscar. Interestingly, her first major purchase after she went to work for Great Atlantic was a beautiful cherry bedroom suite that she used as her bedroom suite for the rest of her life. She continued to work at Great Atlantic after she and Oscar were married while he completed his accounting degree at the University of Tennessee. She later worked at AGA Insurance in Roane County where she enjoyed her well-loved work family and was honored to assist her customers with their insurance needs. She was preceded in death by her husband of 55 years, Oscar P. Taylor, Jr.; her parents, Luther Lee Light and Annie Elizabeth Dunlap Light; and her brother Troy Light. Survivors include daughter, Carol Colvin (Bob); son, David A. Taylor (Laura); granddaughter, Sara Coble (Duncan); grandson, Steven Haynes (Ashley); great-grandchildren, Gracie, Sophie, and James Coble and Grayson Haynes; step great-grandchildren Addison Emery and Theodore De Lorie; step grandchildren, Michael Colvin, Ally Colvin, Calvin Moody, and Claire (Nick) De Lorie; sisters, Carrie Light and Mary (Jerry) Bruneau; and several nieces and nephews. A private family service will be held Sunday, January 24, at Kingston United Methodist Church with burial immediately following at Roane Memorial Gardens in Rockwood. In lieu of flowers, the family suggests memorial donations be made to Kingston United Methodist Church, 212 W. Church St., Kingston, TN 37763. Kyker Funeral Home, Kingston, is in charge of arrangements. www.kykerfuneralhomes.com

Anna Mae Light Taylor, 86, of Kingston, passed away Wednesday, January 20, 2021, at Autumn Care of Farragut. She was a member of Kingston United Methodist Church and a well-loved and active member of the Kingston community for over 50 years.... View Obituary & Service Information

The family of Anna Mae Taylor created this Life Tributes page to make it easy to share your memories.

Send flowers to the Taylor family.