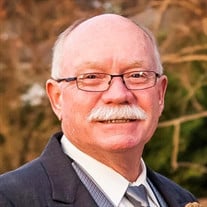 Charles William Mullis, 64, passed away Friday, May 6, 2022. He was surrounded by his wife, daughter, son and daughter in law. Charlie was born September 8, 1957 in Eastman, Georgia to Lonnie and Sarah Mullis. After moving to Tennessee, Charlie graduated from Farragut High School in 1975. In 1976 Charlie began his career in emergency services. A career to include being a firefighter, police officer, security specialist and senior training analyst. In 2006 Charlie retired after serving his country in Iraq with the Department of Defense. Charlie was a founding member of Grace Community Church in Kingston. He would always say “my family is my passion, fishing is my hobby”. Charlie was preceded in death by his parents. He is survived by his wife of 42 years, Carrie Mullis. His son, Andrew Mullis and daughter in law Nicole Mullis, His daughter, Kelly Mullis. His three grandchildren, Charles “Charlie” Mullis, Ellie Mullis and Lincoln Mullis. Also survived by mother in law Geraldine Isham, sister in law, Jackie Golliher, brother in law Tim Bandy and his wife Bobbie, brother in law, Scott Bandy and his wife Paige. Several nieces and nephews as well as great nieces and a great nephew. Also survived by his sister Lynn Anderson. A celebration of life service will be held 7:00 p.m. Monday, May 16, 2022 at Grace Community Church with Reverend Paul Lloyd and Reverend LeGrand Lamb officiating. In lieu of flowers the family asks that donations be made to Grace Community Church 438 W. Race St. Kingston, TN 37763, 865-376-7722. Kyker Funeral Home of Kingston is serving the Mullis Family.

Charles William Mullis, 64, passed away Friday, May 6, 2022. He was surrounded by his wife, daughter, son and daughter in law. Charlie was born September 8, 1957 in Eastman, Georgia to Lonnie and Sarah Mullis. After moving to Tennessee, Charlie... View Obituary & Service Information

The family of Charles "Charlie" William Mullis created this Life Tributes page to make it easy to share your memories.

Send flowers to the Mullis family.