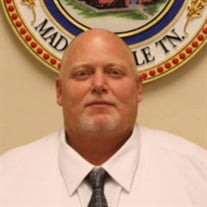 Chief: Gregory Keith Breeden, age 51, of Sweetwater, passed away on Sunday, September 6, 2020, at Parkwest Medical Center, Knoxville. A life-long resident of Sweetwater, Tn., Chief Breeden started his law enforcement career with the Monroe County Sheriffs Dept. in May of 1989 as a dispatcher, in November of 1989 , he became a road deputy and graduated from the Donelson Police Academy on April 27, 1990. He became Sargent of the Madisonville Police Department in 1996 and later that same year he became Captain. On September 11, 2001 until the present he served as Chief of Police. Chief Breeden was a champion of community service: Madisonville Police Toys for Tots from 1995 – present. Preceded in death by his mother: Patricia Breeden, grandparents: Horace and Inez Breeden, H.M. and June Selvidge. Survivors include his wife of 30 years: Lorene Breeden, of Sweetwater, daughter and son-in-law: Beth and Ryan Taylor, of Tellico Plains, grandchildren: Easton, Stetson, and Kaycen, son and daughter-in-law: Tyler and Kaitlyn Smith, of Sweetwater, grandchildren, Ezra, and Hazel, father: Melvin Breeden and special friend : Wanda Davis, of Sweetwater, brother and sister-in-law: Jeff and Lorri Breeden, of Murfreesboro, TN., special friends : “Gudger” Bill Bivins, and Gerald Summey both of Madisonville, Ben Ray Huff of Maryville. Friends may come and visit at their convenience from 2:00 P.M. until 5:00 P.M. on Wednesday, September 9, 2020, at Kyker Funeral Homes, Sweetwater, also visitation with the family will be from 5:00 P.M. until 8:00 P.M. with the funeral service being conducted at 8:00 P.M. in Kyker’s Chapel with Dr. Gerald Atkins officiating. Interment 11:00 A.M. on Thursday in the Sweetwater Memorial Park. In lieu of flowers memorials may be made to Madisonville Police Toys for Tots C/O Volunteer Federal Savings & Loan bank in Madisonville. Please practice social distancing and follow all CDC guide lines. Kyker Funeral Homes, Sweetwater, in charge of arrangements. www.kykyerfuneralhomes.com

The family of Chief Gregg K. Breeden created this Life Tributes page to make it easy to share your memories.

Send flowers to the Breeden family.