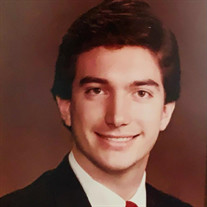 Ellis Condor Galyon, Jr., age 59, of Atlanta, Georgia, passed away on Wednesday, June 1, 2022 and will be laid to rest in Sweetwater Memorial Gardens near other members of the Galyon family on Friday, June 10, 2022. He is survived by his four children, Ellis Condor Galyon, III, of Melbourne, Florida, Winter Reid Galyon of Atlanta, Georgia, Harrison Fodor Galyon, U. S. Air Force, Grand Forks, North Dakota, and daughter, Olivia Grace Carr Galyon, of Atlanta, Georgia. He is also survived by his parents, Ellis Condor Galyon, Sr. and his wife, Chris Galyon of Brentwood, Tennessee; sister and brother-in-law, Lori and David John of Franklin, Tennessee, as well as niece, Danielle John Montesi (Sean) and their children, Elle and Ethan, of Memphis, Tennessee, and nephew, Owen David John, II, of Nashville, Tennessee. Ellis was predeceased by his mother, Charlsie Lourine Harrison Aiken and stepfather, Fay (Gus) Louis Aiken of Knoxville, Tennessee; maternal grandparents, Charles A. and Donna Lourine Harrison of Sweetwater, Tennessee; paternal grandparents, Ellis Eli and Ruby Elizabeth Wilkins Galyon of Sweetwater, Tennessee; Uncle, Rex Lee Galyon; an aunt and uncle, Jeanette and Calvin Miller and Uncle Sam Underwood. Ellis attended Farragut High School in Knoxville where he enjoyed his leadership in the marching band, maintained “first chair” in the clarinet section, while also athletically excelling as a long distance runner for the high school track team. He was a profound lover of music, distinguished by his innate gift of perfect pitch. He was self-taught in guitar, clarinet and piano, instruments he pursued with passion. With the encouragement of his father, he attended, along with his sister, Lori, the University of Tennessee where he performed with the University of Tennessee Pride of the Southland Band and graduated Magna Cum Laude from what has become The Haslam College of Business in Knoxville. His education afforded him a professional and strategic perspective when he was first hired by a small restaurant in Knoxville, the first of many experiences ranging from frontline service, owner proprietor, to regional management consultant. Ellis was a loving and thoughtful son and father to his children, as well as a dear and lifelong friend to his sister, Lori. Friends will remember Ellis for his creative spirit in leading several restaurant enterprises in the South, including L&N Seafood, Outback Steakhouse and Atlanta Bread Company. In recent years, he focused on investing in real estate. The family will be receiving visitors from 12 o’clock Noon to 2 o’clock pm on Friday, June 10 at Kyker Funeral Homes, 113 W. North St. Sweetwater, Monroe County Tennessee. Funeral service to follow at 2:00P.M. with Reverend Keith Wheeler, officiating. Kyker Funeral Homes, Sweetwater, in charge of arrangements. www.kykerfuneralhomes.com

Ellis Condor Galyon, Jr., age 59, of Atlanta, Georgia, passed away on Wednesday, June 1, 2022 and will be laid to rest in Sweetwater Memorial Gardens near other members of the Galyon family on Friday, June 10, 2022. He is survived by his four... View Obituary & Service Information

The family of Ellis Condor Galyon Jr. created this Life Tributes page to make it easy to share your memories.

Send flowers to the Galyon family.