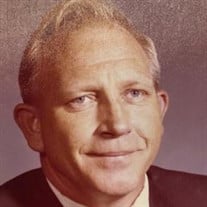 Eric Brummitt, age 92 of Kingston, went home to his Heavenly Father on Sunday, April 25, 2021. He attended Lawnville Road Church of Christ. He was preceded in death by his mother and father, Ora and Clyde Brummett, his sister Jewel Davis and husband Jay, his brother T.R. Brummett and wife Hazel, his brother Glenn Brummitt, and his sister D. Sue Johnson and husband Jerry. He is survived by his wife Pat Brummitt, son Stephen Brummitt, and daughter Marjorie L. Ford (Norman). He also leaves three grandchildren – Nathan Ford, Ellen Ford, and Keegan Ford. He also leaves behind several nieces and nephews. Yes, there are two spellings in the above paragraph, as the Navy changed the spelling from Brummett to Brummitt for both Eric and Glenn. Eric lived a life of service: to his God, his country, his family, and his community. Born in Roane County, he graduated from Roane County High in 1948 and enlisted in the Navy in 1950. While serving two tours in Korea as a Medical Corpsman, he met the love of his life during a furlough. Upon honorable discharge from the Navy in 1954, he and Pat married and moved to Illinois, where she was teaching. He earned a Bachelor’s Degree from Eastern Illinois University in Education and a Master’s Degree in Administration from The University of Illinois. He taught High School Industrial Arts classes and Art classes in Illinois during the school year and built houses in the summertime. He returned to Roane County to accept a Principal’s job in 1977 at the Midtown High School Vocational School. He also taught Building Trades at Roane County High School before retiring from the school system. He knew education was the key to a successful life and sought to help in the rehabilitation of inmates at Brushy Mountain Prison by teaching reading and math. After he finished his teaching career, he built houses in Oak Ridge, as he was not one to sit idle. He was a member of the American Legion Post 50 in Rockwood. He served many years with the Roane County Honor Guard and felt it an honor to perform this last act of respect to our veterans at graveside. Throughout his life he has always had a heart of service: as a deacon in the church, as an Explorer Scout leader, as a CASA volunteer, and just the guy you could call if you needed something built or repaired. Eric could draw, paint pictures, do woodcarvings, and even created some beautiful stained glass. He was a kind man who loved animals, especially dogs and horses. The Family will receive friends from 5:00 p.m. until 7:00 p.m. Thursday, April 29, 2021 at Kyker Funeral Home of Kingston with the funeral to follow at 7:00 p.m. Entombment, 11:00 a.m. Friday at Roane Memorial Gardens with Military Honors by the Roane County Memorial Honor Guard. Kyker Funeral Home of Kingston is serving the Brummitt Family. www.kykerfuneralhomes.com

Eric Brummitt, age 92 of Kingston, went home to his Heavenly Father on Sunday, April 25, 2021. He attended Lawnville Road Church of Christ. He was preceded in death by his mother and father, Ora and Clyde Brummett, his sister Jewel Davis and... View Obituary & Service Information

The family of Eric Vance Brummitt created this Life Tributes page to make it easy to share your memories.

Eric Brummitt, age 92 of Kingston, went home to his Heavenly...

Send flowers to the Brummitt family.