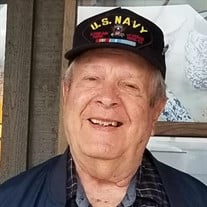 Born February 14, 1932 in Jackson County, Alabama; Died at home December 3, 2021. Flavius joined the Navy in 1951 and served as a radio operator on the USS Sicily in the Korean War. After his Honorable discharge he returned home to Skyline, Alabama in 1955 where he met his lifelong sweetheart at church. The following year, in June 1956, he and Joan Bellomy were married by his grandfather. He started his civilian career with Burlington Industries in Scottsboro, AL. While working full time and raising a growing family, Flavius earned an AA degree from Northeast Alabama Community College. Burlington relocated the family to Wadesboro, NC in 1967 and to Harriman in 1974. Flavius finished his career in Rockwood with Kayser-Roth Corp as supervisor. An exemplary employee, he was proud of his work and dedicated to his job, earning the respect of employees and managers alike. Flavius grew up in the Church of God and he was an active member of the church most of his life, including singing in church (often with his children) on Sundays. He and Joan raised five children sharing with them a love of gardening and the outdoors. He enjoyed hunting with his sons in their younger years, fishing with his children and grandchildren even in his later years, and looking for wildflowers and lightning bugs throughout his life. After retirement, he and his beloved Joan traveled the country many times in their RV exploring the landscapes from Alaska to Florida and Maine to Mexico getting to know the highways and campgrounds in all 50 states. Flavius loved being outside in the National Parks, state parks, on the lakes, and in his own back yard. He and Joan were the light of each other’s lives and he will be greatly missed by all who knew him. Preceded in death: parents: Bill Monroe and Clera Mae Hall sister: Lorene Biggs; daughter: Marilynn Caulder Survivors: wife Joan B. Hall; children and spouses Mark and Nancy Hall of Kingston; Dr. Marvin and Theresa Hall of Signal Mountain; Maurice and Mary Hall of Santa Fe, NM; Martha Hall of Kingston Grandchildren and spouses: Jason and Deborah Caulder; Mitchell and Brittany Caulder; Luke and Keiryn Hall; Sarah Hall; Elaine and Daniel Herrera; Jonathan and Hannah Hall; Cpt. Andrew and Emily Hall; Matthew Hall; Dale Hall and Kiely Smith; Daniel Hall. Five great-children. The Family would like to thank Covenant Hospice and Your Home Team Care for their support. In lieu of flowers, donations may be made to The Wounded Warrior Project at wounderwarriorproject.org. The Family will receive friends 5-7 pm Monday, Dec 6 at Kyker Funeral Home Kingston with the service to follow at 7 pm. Private graveside service Tuesday at Roane Memorial Gardens. Kyker Funeral Home of Kingston is serving the Hall Family.

Born February 14, 1932 in Jackson County, Alabama; Died at home December 3, 2021. Flavius joined the Navy in 1951 and served as a radio operator on the USS Sicily in the Korean War. After his Honorable discharge he returned home to Skyline,... View Obituary & Service Information

The family of Flavius Josephus Hall created this Life Tributes page to make it easy to share your memories.

Send flowers to the Hall family.