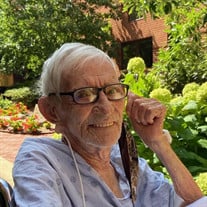 Fred Earnest Pierce went to be with the Lord on January 2, 2021 at the age of 95. Fred lived a full and active life for 93 years. His last two years were painful and difficult, so God called him home to rest in peace. Fred was born in Wallins Creek, Kentucky in 1925 where his father worked as a coal miner in Marion County. They moved to Harriman, Tennessee in the early 1930s where Fred lived the remainder of his life. Fred attended Harriman City Schools and during his senior year in high school left to serve in the U.S. Navy at the age of 17. Fred served in the Navy from 1943 to 1946 and was stationed on the battleship USS North Carolina as a Seaman First Class during WWII. In 1945, while in the service on a short leave, he married a very special woman, Lela Nora Jones Pierce from Sunbright, TN, whom he met in Harriman in 1943 shortly before he enlisted. In 1946, Fred was honorably discharged and returned to Harriman where he and Lela raised four children. Fred was proud of his service on the ship and in 1961, not long after it was moved to Wilmington, NC, he took his family to see the ship. The crew members held annual reunions at the USS North Carolina in Wilmington, Fred and his daughters, Ineta and Patsy, attended the last 10 years together. These reunions were very special to Fred, he especially enjoyed seeing some of his best friends he made during the war. During the reunions, Fred joined other crew members in sharing war stories with the ship’s tourists. Fred was featured in newspapers and TV interviews about his service on the ship. Fred was also one of the crew members who appeared in a historical video, which is now on YouTube titled “Veterans Bring Battleship Back to Life”. Fred worked at Harriman Hosiery Mill for 24 years, starting there in 1942 while in high school prior to enlisting in the Navy. In 1963, he and Lela purchased a restaurant on Roane Street, they operated it as Pierce’s Restaurant for 30 years, with Lela retiring in 1993. Drawn to the life of public service, Fred worked as an Officer for the Harriman Police Department from 1963-1973 and rendered sterling service as the department’s Chief of Police from 1970-1973. Fred later worked for Life of Georgia selling insurance and retired in 1986. Fred was a deacon while attending South Harriman Baptist Church, in his later life, he was a proud member of Caney Ford Baptist Church. Fred was a man of strong faith, a sailor, a coach, a gifted golfer, a hunter, and avid fisherman. Fred started playing golf when he was 13 years old and was a caddy at the Emory Golf Club until he enlisted in the Navy. Fred was a lifetime member of Emory Golf Club, having a membership for over 71 years beginning in 1949. During his golfing years, Fred hit seven hole-in-ones, with his 7th being at Emory Golf Club one month before his 93rd birthday. Fred never met a stranger and was a gifted athlete who coached many in the community, including many golfers at Emory, making a lasting impact on all that had the pleasure of meeting him. Fred is the son of the late Carl and Ruby Clark Pierce, but was raised by his stepmother, the late Annie Baker Pierce. Fred and Lela were married for 60 years, the Lord called Lela home in 2005. Fred is survived by his two sisters Hellen Pierce Kaley and Ruth Pierce Tidwell of Georgia; his four children Ineta Pierce Moore (Jerry), Patsy Pierce Goss (Michael Bain), Buster Pierce (Claudia Luffman), James Pierce (Laura); 13 grandchildren Lela Terry, Terri Pierce, Bryan Terry, Wendy Pierce, Marie Pierce Vagher, Jamie Pierce Bullock, Cody Pierce, Jamey Goss, Wesley Goss, Corey Webb, Todd Luffman, Jeremy Moore, and Reyes Rodriguez; 24 great-grandchildren; two great-great-grandchildren; and numerous other extended family members and community friends. The family is grateful for all the care, prayers, and love given to Fred during this past year. The family will hold a private service in honor of Fred but will have a celebration of life later in the year as circumstances allow. Kyker Funeral Home in Harriman is proud to serve the second-generation Pierce patriarch having served the Carl Pierce family in 1992. In lieu of flowers, memorial donations can be made to Caney Ford Baptist Church, 3469 Roane State Hwy, Harriman, TN 37748.

Fred Earnest Pierce went to be with the Lord on January 2, 2021 at the age of 95. Fred lived a full and active life for 93 years. His last two years were painful and difficult, so God called him home to rest in peace. Fred was born in Wallins... View Obituary & Service Information

The family of Fred Earnest Pierce created this Life Tributes page to make it easy to share your memories.

Send flowers to the Pierce family.