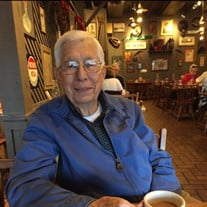 Frederick (Fred) Albert Galyon passed away on October 24, 2020, at the age of 88. Fred was well loved and admired by all who had the privilege of meeting him. Fred was born in Sweetwater, Tennessee, on December 11, 1931. He graduated from Tennessee Technical University with a degree in mechanical engineering in 1957. He is a Korean War veteran. After his time serving his country, he returned to Sweetwater where he fell for the love of his life, Vivian Monroe, whom he married in 1955. They were married for 65 years. He worked as a mechanical engineer for the Tennessee Valley Authority until 1987. For most of his career, he lived and worked in Camden, Tennessee. Fred and Vivian raised their four beautiful children and travelled across the country many times, visiting all 50 states. He had his private pilot’s license and spent many enjoyable hours in his Piper J3 Cub. After retirement, Fred and Vivian moved back to their hometown where they spent many happy years together. Fred enjoyed the simple pleasures in life of going to church where he served as a deacon, eating at Cracker Barrel, reading a good book, drinking coffee with plenty of cream and sugar, and being surrounded by friends and family. Fred is survived by his loving wife; his sons and their wives, Martin (Marty) and Linda Galyon, Keith and Gayle Galyon; his daughters and their husbands, Melinda and Morris Hassler, and Kathryn (Kitty) and Clay Jones; eight grandchildren, Ethan, Abby, Kate, Sam, Spencer, Grace, Olivia, and Shauna; four great-grandchildren, Aubrey, Lewis, Raleigh, and Elise; and many nieces, nephews, cousins, and other dear family members. He is preceded in death by his parents, Ola Mae and Sam Galyon, and his three brothers, Everett, Kenneth, and Doug Galyon. In lieu of a visitation, the family will hold an intimate graveside ceremony and interment, that will be conducted on Tuesday, October 27, 2020 at 2:00 P.M. in the Sweetwater Memorial Park with Dr. Leonard Markham officiating. The family ask all wishing to attend the service please practice social distancing and wear a mask. In lieu of flowers memorials may be made to the East Tennessee Alzheimer’s Association, Suite A 106, Knoxville, TN 37923. Kyker Funeral Homes, Sweetwater, in charge of arrangements. www.kykerfuneralhomes.com

Frederick (Fred) Albert Galyon passed away on October 24, 2020, at the age of 88. Fred was well loved and admired by all who had the privilege of meeting him. Fred was born in Sweetwater, Tennessee, on December 11, 1931. He graduated from Tennessee... View Obituary & Service Information

The family of Frederick "Fred" Galyon created this Life Tributes page to make it easy to share your memories.

Send flowers to the Galyon family.