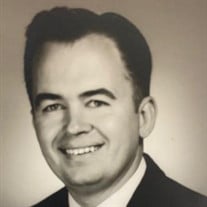 Gerald W. Ross Sr. of Kingston, TN passed away November 23, 2020 at Methodist Medical Center, Oak Ridge, TN. He was born January 24, 1933 in Cleveland TN to E.L. and Mattie Belle Ross of Cleveland, TN. He graduated from Bradley County High School class of 1951 and from Tennessee Technological University with a Master’s Degree in Education, History and Music. Gerald also was certified in church music at Baptist Seminary in Louisville, KY. Gerald was the Band Director at Jellico High school from 1955-1957 where he met his wife of 64 years Annette Adkins. They relocated to Kingston in 1957 where he was a Teacher, Band Director and Glee Club Leader until his retirement in 1985. In 1957 he was Interim Music Director at First Baptist Church of Kingston until 1966. Gerald was then called to Caney Ford Baptist Church in 1966 as Music Director where he served for forty plus years. Gerald is preceded in death by his parents, E.L. and Mattie Belle Ross of Cleveland, TN, grandson, Adam William Ross of Columbus, Ga. He is survived by his wife Annette A. Ross of Kingston, TN; four sons, Gerald W. Ross Jr. of Kingston, Dr. Timothy A. Ross and wife Jean of Columbus, GA, Boyd c. Ross (Corky) of Kingston, TN, Bradley W. Ross and wife Shelia of Kingston, TN. Grandchildren, Justin B. and wife Mandy Ross of Phoenix City, AL, Matthew T. and wife Monique of Huntsville, AL, Colby ross of Ashville, N.C. and Caitlyn Ross of Wise, VA. Great grandchildren, Allie, Madison and Bradon Ross of Phoenix City, AL, Carter and Callia ross of Huntsville, AL, brother Ernest Ross and wife Joyce, nephew Doug Ross all of Enfield, NC, niece Garrett Clark and husband Jerry of Charleston, SC. Gerald was in the Union Lodge #38 of Kingston, TN and Shriners Kerbella Temple of Knoxville TN. He was a member of The Tennessee Society of The Sons of Revolution, Sons of the Confederacy, past member of the Babahatchie Community Band and many other clubs and organizations. Gerald was an avid beekeeper, fisherman and hunter. He enjoyed his blueberry patch and apple orchard for many years. Due to the current COVID 19 pandemic the family will be having a private Graveside Service at Roane Memorial Gardens with Pastor Taylor Phelps officiating. Kyker Funeral Home of Kingston is serving the Ross Family. www.kykerfuneralhomes.com

The family of Gerald W. Ross Sr. created this Life Tributes page to make it easy to share your memories.

Send flowers to the Ross family.