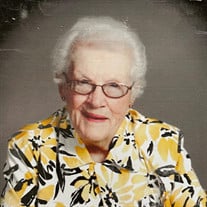 Not sure what to send?

Gloria Bowman Mette of Sweetwater, Tn. passed away peacefully on 3-10-2022. Gloria was born on Feb. 28, 1923, in Norfolk, VA. She spent the earlier part of her life in the Hampton Roads area. Gloria worked as an executive secretary for NASA in Hampton, VA. for many years. After retirement she spent 3 years stationed in Germany with her loving husband John J. Mette. They eventually settled in Toms Brook, VA. in the Shenandoah Valley. Gloria was a devout Catholic and very involved with her church, St. John Bosco in Woodstock, VA. Gloria loved her family dearly. She had a zest and love for life, travel, adventure, card games and Bingo! She touched so many lives in a positive way and never met a stranger. She was always up for laughter and having a good time. Gloria was preceded in death by her loving husband, John Mette, her parents James and Charlotta Bowman, and her 5 siblings: Jim Bowman, Frances Westphal, Dorothy Johnson, Nancy Epley, and Clayton Bowman. She is survived by her only child, daughter Ann Julian and son-in-law Robert Julian of Sweetwater; her granddaughter Sarah Napier and spouse Jason Napier of Dallas, GA.; grandson Daniel Julian of Seattle, WA., and great grandson Joshua Napier of Dallas, GA. She is also survived by numerous nieces and nephews who loved their fun-loving Aunt Glo. She likewise treasured their visits, letters and phone calls. Gloria was a member of St. Marys Catholic Church in Athens, Tn. A graveside service will be held on April 25, 2022, at 1 p.m. in Parklawn Memorial Cemetery in Hampton, Virginia. A Memorial Mass and Reception will be held on June 21, 2022, at 9 a.m. at St. Mary's Catholic Church in Athens, Tennessee.

Gloria Bowman Mette of Sweetwater, Tn. passed away peacefully on 3-10-2022. Gloria was born on Feb. 28, 1923, in Norfolk, VA. She spent the earlier part of her life in the Hampton Roads area. Gloria worked as an executive secretary for NASA... View Obituary & Service Information

The family of Gloria B. Mette created this Life Tributes page to make it easy to share your memories.