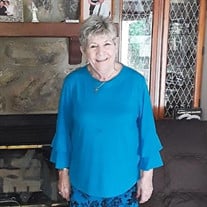 Henrietta Coleman-Maggard, of the Paint Rock Community, born on September 20, 1942, simply known to so many of us as, “Henri,” went Home to be with the Lord on June 24, 2021. Survived by her Husband of 60+ years, Moses Lawrence Maggard “Mose," who had started his career path, moving from Tennessee to Michigan, and then from there, going into the U.S. Army. But, not so quickly, as fate would have it, there was a 17 year-old natural born beauty from Kentucky, who was visiting her older sister in Michigan; and so, she would steal his heart away (and all the while, he would be stealing hers.) Going far from her home in Kentucky to Michigan, "Mose was her Safe Place," she believed in him, she trusted him, but most especially, she was so in love with him, she couldn’t bare to let him go. That said, Mose married Henry when she was only 17-(They were married on December 10, 1960,) and when he joined the U.S. Army, she would go even further from home, following him when he went to WA State,) as stationed in Fort Worth, TX; then in FT Lewis, WA (where she traveled with him;) and then next, he would be stationed in Korea. This changed her role significantly, to that of a Praying Wife and mother, as she was carrying his first child. For fear of her safety, they said their goodbyes, and he felt he had to leave her behind for her own safety; so she stayed with the Maggard Family, giving her time to get to know (and love) each one individually, and collectively. As his trip from Korea came to an end, Mose would travel home expecting their oldest-son, Larry Daniel, who would soon be born in Sweetwater Hospital, Sweetwater, TN. Once back in Michigan, they made a home and a family; adding their second-son, Gary Dean (wife: Ronda, and a special grand daughter, named Cassi - (who gave them the Titles: “ Grammy" and “ Poppy".) They soon traveled back to what would be “home,” in Taylor, Michigan, those early years, but the long, hard, teary-eyed goodbyes got harder and harder when they’d have to leave from their visits to East TN, as her heart belonged here, to us and with us, in Tennessee; where she lived out the last 32 years of her life. Nicknamed “Dollie,” she loved, and was loved by all in return; especially a special friend, Dwayne Kyle. She leaves behind many special nieces and nephews along with children from Church. She was loved by many, Served the Lord and loved her Church, and always had a song in her heart. She was a Member of Johnson’s Baptist Church for 31 years. She is preceded in death by: Parents: Bertha and Daniel Coleman. Sisters: Wanda Lou Brown, Sheila “Cookie” Charles; and Brother: Carmen Coleman. She is survived by: Sisters: Anna Faye Long and Johnny, Ruth Cains, Joy Thompson and Jim, Sally Joe and Mike, Brenda Carol and Doug. Brothers: Roger “Obie” Coleman and Ruby, Daniel “Bo Bo” Coleman and Sally. And Brother-in-Law: Kevin Charles. Arrangements are as follows: Funeral to be held at Johnson’s Baptist Church (Pastor: Jaron Eagle) Receiving of Family and Friends, Saturday, June 26, 10:00 a.m. - 12:00 p.m. Grave Side Service Immediately Following. A special thanks to Fort Loudon Medical Center and their Staff, a shout-out (whoo hooo!) to Fort Loudon Cardiac Staff, and to all the friends we made there; you ARE so appreciated, and will not be forgotten for the kindness and compassion you showed to our family. The family wishes to extend a heart-felt thank you to Johnson’s Baptist Church, both immediate and extended family, and so many friends and loved ones who have been so faithful, thoughtful, and kind. Thanking them for the food, but especially for the Prayers, Love, and Fellowship extended during this difficult time. Songs: Beulah Land-(Heather Henry.) Amazing Grace-(McKayla Kyle.) In the Sweet Bye and Bye (Congregational Hymn) Pall Bearers: Greg Maggard, Anthony Maggard, Dwight Holt, Billy Henry, Mark Long, and Ricky Davidson.

The family of Henrietta Coleman Maggard created this Life Tributes page to make it easy to share your memories.

Send flowers to the Maggard family.