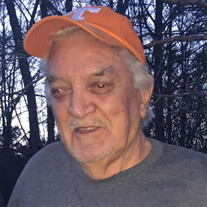 Jack “David” Pryor took his last breath on this earth at 12:13pm on Sunday, November 29. He was born on February 25, 1935 and lived an amazing 85 years. He was preceded in death by his wife Kathryn Adkisson Pryor (Babs) in 2000. She was the love of his life for over 30 years. Also preceding his death were his parents, Seburn and Roxie Pryor, sisters Carolyn Cunningham, Kathy Gilmore and younger brother Wayne Pryor. He is survived by his only daughter, Candice Smith and son in law, Terry. He spent lots of time with both of them. He has 2 grandchildren Carly Harrison & husband Matt and Cruise Smith and wife Katy. He also leaves behind 4 great grandchildren who were his pride and joy and the light of his life... Reed, Cade and Knox Harrison and Raelynn Smith. His role as Pappy was his very favorite title and he did it so well. His 4 great grand children were his very favorite and always kept him smiling. He was a proud Pappy. He also leaves behind one sibling, his brother Bill Pryor of Saint Cloud, Florida, along with several nieces, nephews and cousins who were all very special to him. He was loved by so many. He has some special relatives who mean a lot to him who include: Jeri Brown, Jil Hendries, Jack Brumley (Laurie) and Chuck Brumley. He also has some special friends of many years, Merideth “Tooky” Conley from Idaho and the Wendell Smith family. Anytime you saw Pappy, he had a big smile on his face, the most contagious laugh and told stories for days. He spent his younger working days doing painting and drywall with his business, Pryor Painting and Drywall. He was also a member of the Elks Lodge for many years and enjoyed spending time with his many friends. He still loved an occasional trip to the Brewery to watch a ballgame with friends. He loved Tennessee football, MLB baseball and watching NASCAR. Reading was also a favorite of his. He loved to travel, Las Vegas being his favorite city and some of his favorite days were spent as a family on baseball tournament trips. He has so many amazing qualities, but the two that stand out are his thoughtfulness and willingness to help anyone and he never, ever got his feathers ruffled- he just didn’t let anything bother him- he always had the most positive, upbeat attitude, no matter what was thrown his way. He was simply amazing. Upon Pappy’s wishes, we will celebrate his wonderful life with a private graveside service. Friend and classmate of 1954 Rev. Mason Goodman officiating.

The family of Jack "David" Pryor created this Life Tributes page to make it easy to share your memories.

Send flowers to the Pryor family.