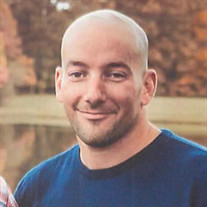 Jacob “Jake” Neil Sexton, age 35 of Rockwood, went to be with the Lord on Friday, July 23, 2021. He was born March 11, 1986. Jake was most known for his kind soul, gentle personality, and his concern for others. He was a friend to many and would be the first to help others in need. Jake loved going to work for the Carpenters Local 50 Union and valued the family of co-workers he had there. Jake was most happy either working on a scaffold at his job or woodworking in his garage on his days off. He was also an Eagle Scout in his younger days and enjoyed kayaking and hiking the Appalachian Trail with his father and brothers. Jake was preceded in death by his grandfathers, Robert Oran and Reverend Kelly Sexton. Jake is survived by his wife of 11 years, Mary Ann Sexton, who abundantly loved and faithfully cared for him during his illness; parents, Darrell and Shelia Sexton; brothers, Todd (Courtney) and Clay (Tara) Sexton; niece, Anna Sexton; nephew, Jay Sexton; grandmothers, Ilon Sexton and Mary Oran; father and mother-in-law, Douglas and Angela Nealon; brother-in-law, Joseph (Montana) Nealon; very best friend, Bradley Nelson; and a host of extend family and friends. The family will receive friends on Monday, July 26, 2021, from 4:00 p.m. to 7:00p.m. at Kyker Funeral Home in Harriman, with service to follow officiated by Marcus Nelson and Rev. Wayne Nelson. Interment will be Tuesday July 27, 2021 at 11:00 a.m. at Mt. Vernal Cemetery. In lieu of flowers, the family suggest memorial donations be made in Jake’s Memory to the Oral Cancer Foundation; 3419 Via Lido #205, Newport Beach, California 92663.

The family of Jacob "Jake" Neil Sexton created this Life Tributes page to make it easy to share your memories.

Send flowers to the Sexton family.