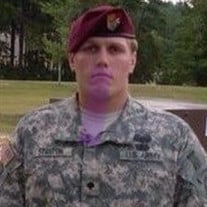 Joe Christoph Stanton, 34, passed away on November 2nd, 2021 in Richmond, Kentucky. He was born to Joe and Jeanne Stanton in 1987 on Davis Monthan Air force Base, in Tucson, Arizona. He was a loving son, brother, husband and father to his family. Christoph was active in sports and achieved multiple trophies and awards as a wrestler during his time in high school in his hometown of Kingston, Tennessee and in college at Iowa Central. After high school, he joined the United States Army and served as an Imagery Analyst within Military Intelligence as well as earning his Paratrooper Jump Wings and serving with the 3rd Special Forces Group. He served his country dutifully for four years and participated in two combat tours in Afghanistan during Operation Enduring Freedom. He met his wife, Anna, while working at the U.S. Embassy in Moscow, Russia. Together they had two children, Mark and Maria Stanton. After moving back to the States, Christoph became a Quality Control/Certified Welding Inspector working for The Bechtel Corporation. He cherished his family above all else and always took care to provide in every way possible. He will always be in the loving memory of his surviving family members. His father and mother, Joe and Jeanne Stanton, his brother Austin Stanton, his sister Katrena Stanton Silsbee, and her husband AJ Silsbee. He will always be cherished by his wife Anna Stanton and their two children, Mark and Maria Stanton. Always loved and remembered by his aunts, uncles, and cousins. Preceded in death by his grandparents William and Helen Stanton on his father’s side and Roy and Cornelia Kuhlengel on his mother’s side. He will always be in the hearts of his friends and family who will forever cherish his kind soul and and loving nature. There will be a receiving of family and friends on Monday, November 8th from 6pm to 8pm at Kyker Funeral Home 430 Morgan Ave. Harriman, TN. 37763. Funeral services will be held on Tuesday, November 9th at Hughes Cemetery 13702 Nashville Hwy. Baxter, TN. 38544 at 10am.

Joe Christoph Stanton, 34, passed away on November 2nd, 2021 in Richmond, Kentucky. He was born to Joe and Jeanne Stanton in 1987 on Davis Monthan Air force Base, in Tucson, Arizona. He was a loving son, brother, husband and father to his family.... View Obituary & Service Information

The family of Joe Christoph Stanton created this Life Tributes page to make it easy to share your memories.

Send flowers to the Stanton family.