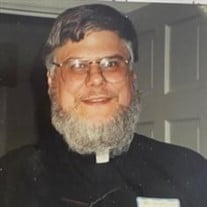 The Reverend Joseph W. Pinner age 71, entered Eternal Rest in the early morning of August 7, 2021. His beloved wife of 40 years was by his side when he left for Heaven. Joseph was born June 5, 1950 in Memphis. He was the only child of J. Walter Pinner Sr. and Dorothy Allstadt Pinner. At 12 years old he announced he was called to be a priest. He continued his education in Memphis and Seminary in Alexandria VA. He was ordained to the priesthood in the Episcopal Diocese of Tennessee in 1976. He served his first congregation in Humboldt and then parishes in Mississippi and Louisiana. In 1999 her returned to Episcopal Diocese of East TN to serve as Rector of St. Andrews Harriman, until his retirement in 2011. Joseph was an amateur radio operator, and this remained a hobby since the age of twelve. He was a member of the Radio Club of Roane County and volunteered his services generously in the county. During his tenure and in his retirement, he was heavily involved in the community of Roane County. His commitment to the less fortunate in the county led him to serve as chair of the Roane County Cooperative Ministries for a number of years. He along with 4 other ministers founded Hands of Mercy Enterprises where he served as board member until his death. Joseph will be remembered by all who knew him as a kind and gentle man whose talents he used in service to God and his fellow man through every endeavor he undertook. He leaves behind a legacy of love and commitment to God and his fellow man that knows no measure. His wife Sharon, sons Thomas and wife Camryn, Daniel and wife Lydsey, daughter Megan and husband Stephen Bakeler and 7 grandchildren who will carry his mantra in our hearts of “always make us mindful and willing to serve the needs of others.” He is preceded in death by his parents Dorothy Allstadt and J. Walter Pinner Sr. and his precious daughter Blair Elizabeth. Memorials may be made to Hands of Mercy PO Box 1168 Kingston, TN 37763 or St. Stephen’s Episcopal Church 212 N Tulane Ave, Oak Ridge, TN 37830. Friends will be received from 11:00 a.m. until noon Saturday, October 23, 2021 at St. Stephen’s Episcopal Church in Oak Ridge with Requiem Mass and celebration at 12:00 noon with Rt. Reverend Brian Cole, Bishop of Episcopal Church of East Tennessee, along with the Reverend Bailey Norman, Rector of St. Stephen’s of Oak Ridge. Masks are required in the church. Kyker Funeral Home of Kingston is serving the Pinner Family. www.kykerfuneralhomes.com

The Reverend Joseph W. Pinner age 71, entered Eternal Rest in the early morning of August 7, 2021. His beloved wife of 40 years was by his side when he left for Heaven. Joseph was born June 5, 1950 in Memphis. He was the only child of J. Walter... View Obituary & Service Information

The family of Joseph Walter Pinner created this Life Tributes page to make it easy to share your memories.

Send flowers to the Pinner family.