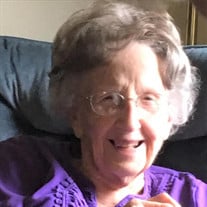 Kathryn Lourine (Parker) Ragan, 99, of Kingston, TN passed away peacefully at Jamestown Assisted Living on Sunday, September 5, 2021. Kathryn was born to Buford Parker and Janie Rebecca (Brymer) Parker on April 12, 1922 in Giles County, TN. Both of Kathryn’s parents died at an early age and she was raised by her Uncle Hobert and Aunt Blanche Parker. After graduating from Central High School Kathryn married Willoughby (Bill) Ragan, Jr., in Davidson County on June 14, 1940. They began a good life together, and Bill began his career with Western Electric Company. During the WWII years Bill worked at the then secretive Oak Ridge National Laboratory. On April 10, 1946 while living in Oak Ridge they had a son, Kenneth (Ken) Parker Ragan. In the late 1940’s they moved to Kingston, TN where they made their home on Dogwood Lane. Kathryn was an excellent cook, a generous hostess, and person of impeccable character and grace. Both Kathryn and Bill loved the Lord and were longtime members of the Kingston Church of Christ where Bill served as an elder. She was preceded in death by Bill, her husband of 50 years in 1990, and by their son Ken in 2016. She is survived by a grandson, Shawn Ragan and wife Christi of Ashland City, TN; great-grandchildren Justin (Cassie) Ragan, Josh (Elley) Ragan, Austin (Jennifer) Luck; Jacqueline Singleton, Hayden Ragan, and Katherine Ragan; and six great-great-grandchildren. Graveside services and interment will be at Roane Memorial Gardens in Rockwood, TN at 10:00 on Friday, September 10. Arrangements will be by Kyker’s Funeral Home and the graveside service will be conducted by Alva Moore and Danny Nunn. In lieu of flowers, please consider a donation in her memory to Kingston Church of Christ, 303 N. Kentucky St, Kingston, TN 37763. Kyker Funeral Home of Kingston is serving the Ragan Family.

The family of Kathryn Parker Ragan created this Life Tributes page to make it easy to share your memories.

Send flowers to the Ragan family.