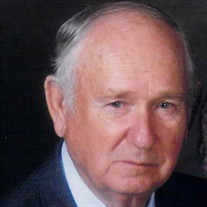 Kenneth Eugene Sutton, age 92, of Kingston died Friday, October 8, 2021 at his home of the last 65 years. Raised in Monroe County’s Oak Grove Community, he was born on August 28, 1929 to Claude and Effie Bledsoe Sutton. He was a Korean War era veteran and had many stories about his days at Fort Jackson. A 1952 graduate of the University of Tennessee, he had a B.S. in agriculture/animal husbandry. He was a 1950 graduate of Hiwassee College where in later years he established an endowment in honor of his parents prior the college’s closure. While a student at UT, he met Juanita Burkhart either on a bus or a party depending on who told the story of their courtship. They married in 1955 and moved to Kingston the following January when he became the UT Agriculture Extension Service Assistant Agent for Roane County. In his role, he worked with young people and volunteers participating in 4-H activities. He became the Extension Leader in 1967 working closely with members of the community on everything from Lawns and gardens to livestock and crop production. He served on the board of the Roane County Farm Bureau for 36 years. He retired from the Extension Service in 1993 to raise tobacco and harvest timber on his farms in Monroe and Roane counties. He did this for a few years until becoming Juanita’s caregiver until her death in 2011. Before joining the army, he was employed as a herdsman at Madisonville’s Coldstream Farm owned by John Humbard, the engineer for the Newfound Gap Road, the Panama Canal and Alaska highways. During his early career in Roane County, he assisted Dr. Fred Allen, a country veterinarian on his rounds. Mr. Sutton is predeceased by his wife of 56 years Juanita Burkhart Sutton; parents Claude and Effie Bledsoe Sutton; brothers Raymond Sutton, Gillis Sutton, and J.C. Sutton; sisters Louise Green and Claudia Atkins; Father and mother-in-law Ernest Monroe and Cornelia Henderlight Burkhart. He is survived by his caregiver and daughter Monica Sutton and her husband Gary Vaughn of Madisonville; son Kent of Clinton and his partner Diane Waller; sister-in-law Kathleen Sutton of Parrottsville; three grandsons; and five great grandchildren; long-time friend Thomas Fortune of Mountain City; caregiver and special friend, Jan Farmer; and many nieces and nephews. The family wishes to thank Dr. John Acker and his assistant Teresa Julian for taking wonderful care of Daddy for more than 35 years. The family will receive friends from 5:00 to 7:00 p.m. on Saturday, October 9 at Kyker Funeral Home in Kingston. Reverend Wayne Trentham will conduct a graveside service on Sunday, October 10 at 2:00 p.m. at Oak Grove Missionary Baptist Church Cemetery in Madisonville, TN. In lieu of flowers, the family requests that those who wish to honor Mr. Sutton’s memory do so by donating to the Oak Grove Missionary Baptist Church Sutton Trust Fund, 502 Mill Street, Madisonville, TN 37354. Kyker Funeral Home of Kingston is serving the Sutton Family.

Kenneth Eugene Sutton, age 92, of Kingston died Friday, October 8, 2021 at his home of the last 65 years. Raised in Monroe County&#8217;s Oak Grove Community, he was born on August 28, 1929 to Claude and Effie Bledsoe Sutton. He was a Korean... View Obituary & Service Information

The family of Kenneth Eugene Sutton created this Life Tributes page to make it easy to share your memories.

Send flowers to the Sutton family.