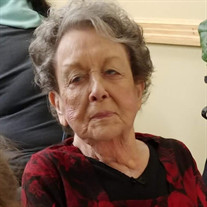 Louise Katherine Escudero Criswell passed on January 26, 2021 to be with the Lord. She was of the Lutheran faith. Louise was born to William John Escudero and Marie Elizabeth Potterf Escudero on August 28, 1933. She was the third of six children. She married Norval Earl Criswell at the age of 18. They had three children Debra Anne, Rodney Lynn and Pamela Sue. Louise came from a generation of hard workers with few complaints. She grew up during difficult times and worked to instill in her children the value of higher education. She wanted to be a nurse but was unable to attend college. She was very proud that all of her three children as well as her daughter-in-law and son-in-law became nurses. During her lifetime Louise and husband Norval owned and operated Criswell Paint and Cabinet Shop in Kiowa, Kansas. She was an excellent framer and people came from many miles to have her frame their paintings, etc... They sold the business due to health issues. Later on, they also owned and operated Criswell Drilling Company in Perryton, Texas. Louise worked tirelessly as the office manager. She always excelled and took pride in her accomplishments. Louise and Norval moved to beautiful East Tennessee in 1985. Louise was a warm and loving person, generous of spirit. She was compassionate, empathetic and believed no man was better than another and all deserved an opportunity to achieve their dreams. She was a quick-witted, well-informed person who kept up with national and foreign events. She read the newspaper front to back daily and watched various news channels and loved a good debate. She was a spirited woman who loved college sports and especially loved the Lady Vols. She rarely missed a game. She also found great entertainment in movies and games. She was preceded in death by her loving husband Norval, “The most handsome man ever, “according to Louise, her parents, son-in- law Gary Benedict (Pamela), sister Wilma Smith and husband John, brothers Frank, Harry and Charlie Escudero, in-laws Oscar and Cora Criswell, brothers-in-law John and wife Shirley, Darrell and wife Edith, Sisters-in-law Vera Armstrong and husband Jack, Ethel Copenhaver and husband Melvin, Doris Davis and husband Laverne, Margaret Criswell (Norman). Sadly, she also lost nieces, nephews and great nephews. She is survived by her three children and their families, daughter Debra, grandchildren, Amber Kirton (Wes) great- grandson Traite Sponaugle, grandson Cris Huling (Natalie) great- grandson Dyran, son Rodney (Mary), grandchildren William Schaad, Emily Schaad(Jack Kersey) and great-grandson Finn, daughter Pamela, grandson Robert Benedict (Debbie) great- grandchildren Reagan and Grayson and her namesake, granddaughter Louise Katherine Criswell Benedict( Rob Jackson), brother William (Joyce) Escudero and brothers-in-law Norman Criswell and Larry (Geraldine) Criswell. She leaves behind many beloved nieces and nephews. Louise will be deeply missed. She was a wonderful wife, mother, grandmother, great-grandmother and friend. With sadness comes joy because she is reunited with those who went before. Due to the COVID pandemic family services will be held graveside at Madison Cemetery in Beaver County, Oklahoma to be announced at a later date. Kyker Funeral Home of Kingston is serving the Criswell Escudero Family. www.kykerfuneralhomes.com

Louise Katherine Escudero Criswell passed on January 26, 2021 to be with the Lord. She was of the Lutheran faith. Louise was born to William John Escudero and Marie Elizabeth Potterf Escudero on August 28, 1933. She was the third of six children.... View Obituary & Service Information

The family of Louise Katherine Escudero Criswell created this Life Tributes page to make it easy to share your memories.