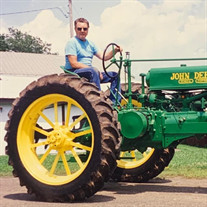 Melvin Rolland Lindholm “Butch”, 86, formally of Sweetwater, TN passed away on August 1, 2021, at his home with his family by his side. Melvin was a loving husband, father, grandfather, and great grandfather. Melvin was married to his loving wife Mary Alice for 31 years and were loving parents to 10 children. Melvin was a member of the US Navy for 9 years, serving on the USS Albany. Originally from New York, Melvin and Mary Alice moved to Sweetwater in 2005. Outside of being a family man Melvin enjoyed many other things such as playing his guitar and reading a good book, especially the Bible. Melvin also had a real passion for farming and raising draft horses. Melvin was first and foremost a farmer, but when he was not farming, he doubled as a bus driver. After leaving the bus industry he began a career at Proctor and Gamble Pharmaceuticals as a truck driver, where he would retire from. In some of his free time between working Melvin owned and operated an 18-wheeler. Melvin also had a love for history and was a huge history buff. He visited many of the historical landmarks and barns all across the east coast. Melvin is predeceased by his parents Niels and Reba Lindholm, his son Jeffrey Law, his great granddaughter Miach Kennedy; and his long-time fur baby of 17 years Lonesome. Melvin left to cherish his memories his loving wife, Mary Alice Lindholm; 9 children, Mark (Betsy) Lindholm of NY, Marcia (Lawrence) Post of NY, Karen (Don) Westcott of NY, Michael Lindholm (NY), Lisa (Glenn) Jones of NY, Aldena (Phillip) Baker of FL, Kenneth (Crystal) Law of TN, Robin Bolt of TN, and Gary (Angie) Law of TN; one devoted sister Barbara Allen of CO; 31 grandchildren, 31 great grandchildren; and a host of other family and friends. The family will receive friends and family on Thursday August 5, 2021 at Kyker Funeral Home- Sweetwater from 5pm- 6pm with a service following at 6 pm. The burial will be held at Westview Cemetery on Friday August 6, 2021 at 2 pm.

Melvin Rolland Lindholm &#8220;Butch&#8221;, 86, formally of Sweetwater, TN passed away on August 1, 2021, at his home with his family by his side. Melvin was a loving husband, father, grandfather, and great grandfather. Melvin was married to... View Obituary & Service Information

The family of Melvin "Butch" Rolland Lindholm created this Life Tributes page to make it easy to share your memories.

Send flowers to the Lindholm family.