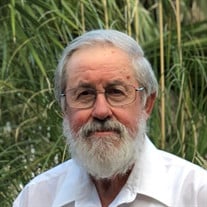 Robert (Bob) Lee Sliger, 82, formerly of Madisonville, passed away at home on March 21, 2021. Bob was born on September 4, 1938 in Ten Mile, Tennessee at the Sewee Creek Angus Farm to Joe and Viola Sliger. He obtained his B.S. Degree from Tennessee Tech and his M.S. Degree from the University of Tennessee. He began working for the University of Tennessee Extension Service in 1966, first as a special agent in test-demonstration, working a four-county area including Bradley, McMinn, Monroe, and Polk Counties. During that time, he met Barbara Faye Delay, a young home agent also employed by the University of Tennessee. In 1969 the couple married and made their home in Madisonville when Bob was appointed the Monroe County Extension Agent. In 1973, Bob was named the National Outstanding Young Agent of the Year by the National Association of County Agents. At the time the news reported that he was “eminently worthy of recognition as an Extension leader, bringing to extension work a farm background and excellent training.” Although he took a short break in 1975 to take up banking, Bob returned to extension work in 1979, and never looked back. Many nights after dinner he would return to his ever-famous cluttered office in the basement of the Monroe County Courthouse, where he returned calls that came in during the day when he was on farm visits. Weekly radio shows were recorded, and newspaper articles submitted informing the farmers of ground-breaking innovations that would produce better crops, more milk, or healthier livestock. His cutting-edge bull leasing program allowed farmers a new way to build better herds by sharing costs and trimming overhead from bull ownership. Most Saturdays and Sundays were spent on Sewee Creek Angus Farm with his own herd of registered Angus Cattle. He cultivated and created a closed herd for over 50 years, and it remains that way today. Those weekends were also spent teaching farming to his only child, Roberta, named for her father. It was probably a sign he had trained her a bit too well in the cattle business, and a sign she would be a lawyer, when he asked his daughter to swap cattle with him and she insisted on making a contract (she was in elementary school at the time.) Due to his longstanding commitment and dedication to local farm families, in 2006 Bob was named Monroe County Outstanding Citizen of the Year before retiring in 2009. Despite his retirement, he continued his work on Sewee Creek Angus Farm until health forced him to move to Kingsport to be closer to his family, where he took on a new role as Granddaddy. His farm lessons continued with a new generation, with gardening in the back yard and trips to the farm to see the cattle. The week before he died he was still collecting soil samples in an effort to improve his daughter’s yard. Bob was preceded in death by his parents Joe Sliger and Viola Kyker Sliger, brother James K. Sliger, sister Betty Jean Sliger, his infant twin daughters, Barbara LeeAnn and Sally DeeAnn, and wife of 49 years Barbara Faye Delay Sliger. He is survived by his daughter Roberta Cecile Sliger Wimberley and son-in-law Matthew Hall Wimberley of Kingsport, TN and his grandsons, Michael and Matthew. Due to covid concerns, Bob will lie in state with the family receiving friends at Kyker Funeral Homes, Sweetwater on Friday March 26, 2021 from 2-6pm, with a graveside service in Middle Tennessee the following day. One of the highest honors bestowed upon him was the establishment of The Robert L. Sliger Scholarship Fund created by the Monroe County Cattlemen’s Association. In lieu of flowers, contributions to the scholarship can be sent to John Wiggins, Treasurer, 2361 Niles Ferry Road, Madisonville, TN 37354. Please practice social distancing and wear a mask for safety. Kyker Funeral Homes, Sweetwater, in charge of arrangements. www.kykerfuneralhomes.com

Robert (Bob) Lee Sliger, 82, formerly of Madisonville, passed away at home on March 21, 2021. Bob was born on September 4, 1938 in Ten Mile, Tennessee at the Sewee Creek Angus Farm to Joe and Viola Sliger. He obtained his B.S. Degree from... View Obituary & Service Information

The family of Robert "Bob" Lee Sliger created this Life Tributes page to make it easy to share your memories.

Send flowers to the Sliger family.