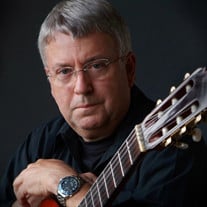 Robert “Bobby” Brient Burleson, 69, of Sweetwater, TN, passed away on January 1, 2021. Robert was born on March 25, 1951 to Robert T. Burleson and Doris J. Burleson in Sweetwater, TN. After graduating from Sweetwater High School in 1970, he went on to study classical guitar and photography. Robert had a career working as a master electrician, as well as capturing many memories as a photographer. In addition to being a loving father and grandfather, Robert also spent much of his life as a dedicated leader in Boy Scouts. He had a love for the outdoors and found pride in passing down the many skills he had acquired to the young men in the organization. Two of those young men being his sons, both of which went out to obtain the great honor of Eagle Scout. Robert never met a stranger and was quick to engage in conversation with anyone who needed a word of encouragement, a laugh, or an ear to listen. Throughout his life he held an unwavering faith in God in which he shared with those around him. Robert joins his parents, Robert and Doris, and brother, Rick Burleson, in Heaven. He is survived by his son Andy Burleson and wife Chasity of Asheville, NC: his son David Burleson and wife Nihan of Easley, SC; granddaughters Maci, Payton, and Lila: grandsons Daghan and Taylor; his sister, Susan Stephens, his brother, Scott Burleson and sister in law Cheryl Burleson of Sweetwater, TN,; as well as his nieces, Heather, Emily and Caitlin; and nephews Eric and Nicholas. A remembrance service will be held virtually on the zoom platform on Saturday, January 16th at 2pm EST. Please follow the below link to join the service and use passcode Bobby https://us02web.zoom.us/j/87202579592?pwd=bFo4VUtIVDE4MTNpSnBnQjlUMUY2QT09 In lieu of flowers, the family is asking for donations to be made to the National Forest Foundation, https://support.nationalforests.org/give in Robert’s name so that the next generation can enjoy the outdoors just as he did. www.kykerfuneralhomes.com

The family of Robert "Bobby" Brient Burleson created this Life Tributes page to make it easy to share your memories.

Send flowers to the Burleson family.