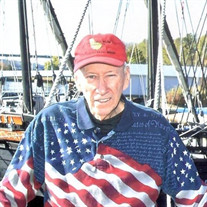 Robert (Bob) Joseph Griffin was born March 27, 1937, in Salem, Massachusetts, the youngest child of three children of John and Alice Griffin, descendants of County Waterford, Ireland. He was blessed beyond measure with 83 full years of life. He died at his beloved Waterford Farm in Ten Mile, Tennessee on Saturday, January 9, 2021 from a heart attack. His last gift was spending his final day surrounded by his loved ones celebrating the January family birthdays. He was a faith-filled man and member of the Blessed Sacrament Catholic Church in Harriman, Tennessee. His love of learning started at the St. John Preparatory School in Massachusetts. As a young child, he helped on the Osgoode family farm with their fruit orchard and dreamed of owning a farm. He was a proud graduate of the United States Merchant Marine Academy in Kings Point, New York. He exemplified and lived their motto “Deeds Not Words” of service-above self. His defining career moment was his “sea year” as a midshipman where he sailed around the world gaining valuable life experiences. In 1966, his dreams of living on a farm came true when he established Waterford Farm in Ten Mile, Tennessee. In 1971, he began his nuclear engineer career with the Tennessee Valley Authority Watts Bar Nuclear Plant for 29 years. God blessed him with the love of his life and anchor, Gail Marie Gilmartin who he met through her family. They were married at Kings Point Memorial Chapel in New York and had 35 years of a Godly marriage. They wanted a big family and were blessed with six children who they showed a wonderful example of faith, hope and love. Cancer ended Gail’s journey here and took her to heaven in 2003. Thankful for his years of faithful service to his church as a Sunday school teacher, lecturer, singer, 4th Degree Knights of Columbus, and with the remodeling committee for Blessed Sacrament Catholic Church; believing in the educational learning benefits of small schools like Midway High School and fighting all his “Battles of Midway” to keep it from being consolidated; annual community fish fry in the Valley; plus 20 years of serving on the Watts Bar Utility District helping to bring city water to rural areas in Tennessee. His proudest legacy is his children! He leaves Waterford Farm to them with new ponds, blueberry bushes, fruit trees and lots of newly planted trees, and a love of the country way of life. He knew he would not see all the fruits of his labor in his time on this Earth but did everything for the future generations. He was preceded by in death by his wife Gail Marie Griffin; his parents John and Alice Griffin of Salem, Massachusetts; his brother Reverend John Griffin, and sister Mary Guerrette. Legacy: Daughters and sons-in-law: Mary Alice and John Devenney of Friendsville, Tennessee; Eileen and Pierre Legault of Knoxville, Tennessee; Kathleen and Kent Patterson of Kingston, Tennessee Sons: John Griffin of Ten Mile, Tennessee; and James Griffin of Ten Mile, Tennessee Son and daughter-in-law; Peter and Janay Griffin of Seymour, Tennessee. Grandchildren: Savannah Griffin, Isaac Legault, Eli Griffin, Abigail Patterson, Elise Legault, Maggie Patterson, Annabelle Legault, and Kayla Patterson. Brother-in-law: Phil Guerrette Sadly, in COVID times, it will be a family only funeral Mass at 10 a.m. Thursday, January 14, 2021 at the Blessed Sacrament Catholic Church with Father Michael Sweeney officiating. Burial will be in the Waterford Cemetery in Ten Mile, Tennessee. In lieu of flowers, memorials may be made to Pat Summitt Foundation for Alzheimer’s at etf.fcsuite.com in Knoxville, Tennessee to help families touched by the awful disease and to help find a cure. He was diagnosed with Dementia and had more “senior moments” as he called them the last year. Time will never take away our precious and deep memories of him and all the hats he wore of being a wonderful Christian, husband, father, son, brother, friend, farmer, and storyteller. He will be missed. Believe he is singing in the heavenly choir and home now soaring on the wings like eagles “Isaiah 40:31” May he rest in peace in Christ! Kyker Funeral Home of Kingston is serving the Griffin Family. www.kykerfuneralhomes.com

Robert (Bob) Joseph Griffin was born March 27, 1937, in Salem, Massachusetts, the youngest child of three children of John and Alice Griffin, descendants of County Waterford, Ireland. He was blessed beyond measure with 83 full years of life.... View Obituary & Service Information

The family of Robert J. Griffin created this Life Tributes page to make it easy to share your memories.

Send flowers to the Griffin family.