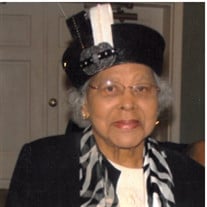 Ruby Mae Donaldson Wilkerson was born to Nellie Cannon and Thomas Donaldson on February 14, 1925, in Harriman, Tennessee. She lived most of her adult life in Philadelphia, Tennessee. She passed into eternity on August 30, 2021, while living with her daughter and son-in-law in Cordova, Tennessee. She was 96 years old at the time of her death. Known to her older friends as "Jim", she was a beautiful person and loved everyone. Everyone she met, she loved. And, oh, how she loved to hug! She was a generous Christian woman who loved her family dearly. She was a devoted wife, mother, grandmother, and sister. Ruby accepted Christ as Savior at and early age and served her Lord faithfully. She was a dedicated member at Harmons's Chapel Cumberland Presbyterian Church in Philadelphia, was ordained an Elder there, and remained a member until Harmon's Chapel was closed. She moved her membership to Mt. Cumberland Presbyterian Church and served as an Elder there also. She served faithfully in Hiwassee Presbytery and Tennessee Synod, and attended meetings of the General Assembly annually until her health deteriorated. She moved to Cordova, Tennessee in 2021 to live with her daughter and son-in-law and became an active member of the Mt. Tabor Cumberland Presbyterian Church, Jackson, Tennessee. Professionally, Ruby was employed 35 years at Oak Ridge National Laboratories as a Laboratory Technician. She was preceded in death by her husband of sixty years, Floyd Robert Wilkerson; her parents, Nellie and Thomas Donaldson; sister, Ruth Elizabeth Huff; brothers - Howard, Bill, Cleatus, and Thurman. She is survived by her daughter, Patricia Ruth Wilkerson Wood; a son-in-law, Rev. Dr. R. Stanley Wood; a grandson, Kevin Stuart (Lisa) Wood; a granddaughter, Diantha Celia Wood; one great-grandson, Lance Christopher Wood; a brother-in-law, Robert Eugene Wilkerson; three sisters-in-law, Betty Wilkerson, Jean Wilkerson, Laura Wilkerson; and a host of nieces, nephews, and cousins.

Ruby Mae Donaldson Wilkerson was born to Nellie Cannon and Thomas Donaldson on February 14, 1925, in Harriman, Tennessee. She lived most of her adult life in Philadelphia, Tennessee. She passed into eternity on August 30, 2021, while living... View Obituary & Service Information

The family of Ruby Donaldson Wilkerson created this Life Tributes page to make it easy to share your memories.

Send flowers to the Wilkerson family.