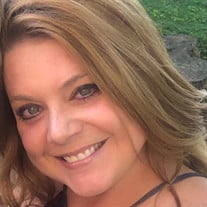 Stacey LeAnne Shields Shamblin, age 45, of Sweetwater, passed away on Monday, April 26, 2021, at her home. She was a member of First Baptist Church of Sweetwater. She received her master&#8217;s degree from Lincoln Memorial University. Stacey... View Obituary & Service Information

The family of Stacey LeAnne Shields Shamblin created this Life Tributes page to make it easy to share your memories.

Send flowers to the Shamblin family.