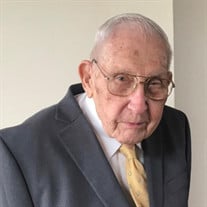 Dr. Thomas (Tom) Wesley Pickel, Jr. passed peacefully after a brief illness at the age of 93 with a love for God and family at Ft. Sanders Hospital on the 26th of January 2021 at 10:35 PM. Tom was born on the 13th of October 1927 in Kingston, Tennessee, at the family home that stood at the corner of Race Street, where the present courthouse is located. His love of sports began at an early age, with his father coaching football at Roane County High. As a youth, Tom was a charter member of Boy Scout Troop 101. Tom’s first real job in August of 1938 was carrying the Chattanooga Times. During the summer of 1941, he quit the paper route to work with his father on school construction. Tom’s high school years were occupied with playing basketball and football and leading a jazz band. He served as the captain of the football and basketball teams his senior year. Upon graduation in 1945, he received a football scholarship to Milligan College. At the end of his first year of college, he joined the Army and was transferred into the Army Air Corps, and most of his military service was spent in the Washington D.C. area working to complete the first government maps from aerial photographs of Antarctica. After his discharge in January of 1948, Tom returned to college, entering Vanderbilt University where he met Jane Dunlap. While at Vanderbilt, he was a member of Tau Beta Pi and served as president during his senior year. He graduated with a degree in chemical engineering, and they were married on June 9, 1951, and then soon moved to Baytown, Texas, where he was employed as an engineer with the Humble Oil and Refining Company (Exxon Mobil). Though he found much success in Texas, he elected to move back to Kingston due to his love for this area. He felt it was the perfect place to raise his children and be close to family. Tom received a masters degree from the University of Tennessee in mathematics and his doctorate from the University of Illinois in mechanical engineering. Tom was an active parent and grandparent, teaching Sunday school and participating in other youth recreational programs. He valued and encouraged youth to achieve success in academics, athletics, and the arts. Tom worked with the American Seahorse Institute at Wrightsville Beach, North Carolina on desalination. In 1974, he was recognized by ORNL for his contributions to the coal conversion fields. He also served his community as the Republican County Chairman, as member of the Roane County School Board for two terms, as a member of the Kingston Rotary Club, served as chairman of the local United Way, and was a founding member of the Kingston Library foundation. He also served on a national committee that worked to develop Earthquake standards for designing nuclear facilities. For eighty-one years, Tom was an active member at Bethel Presbyterian Church, where he also served as an Elder, taught Sunday school, and was active with youth. He set an example for equality and championed social justice and human rights for all. Tom served twice as the representative for the Presbytery of East Tennessee at the General Assembly of the Presbyterian Church semi-annual meeting. After 32 years, he retired to the farm in December of 1991 where he enjoyed years spent with his grandchildren and great grandchildren. Preceded in death by: Parents: father, T. Wesley Pickel (Delia) and mother, Mae Jackson Pickel In-laws: Clyde P. and Christine Dunlap; brother-in-law: Clyde P. Dunlap, Jr. and Bettye Cloyd and Ruth Melton sister, Margie Gulley; grandson, Jacob Murr Survived by: wife of 69 years, Jane Dunlap Pickel; brother, Eugene Pickel Children: daughter, Laura Dailey (Ted); son, Thomas Wesley Pickel III (Lisa); and daughter, Margaret Murr (Greg) Grandchildren: Stephanie Wright (Jay); Janice White; Dr. Rebecca Pierce (Joe); Justin Murr (Ashley); Rachel Gallaher (Adam); Ellen Dailey; Jonathan Dailey (Abbie) Great Grandchildren: Maggie Wright; Grayson, Gabriel, and Wesley Pierce; Mae Gallaher; Emerson Fox and Iris Murr A graveside service will be held on Saturday, 30th of January 2021 at Lawnville Cemetery at 2:00 PM with the Reverend Wendy Neff officiating. The family asks for masks to be worn and social distancing guidelines to be followed. In lieu of flowers, donations may be made to the Bethel Presbyterian Church building fund (203 S. Kentucky St. Kingston, TN 37763) or to Roane County High School with the designation for Kingston athletics (540 W. Cumberland St. Kingston, TN 37763). Kyker Funeral Home of Kingston is serving the Pickel Family. www.kykerfuneralhomes.com

Dr. Thomas (Tom) Wesley Pickel, Jr. passed peacefully after a brief illness at the age of 93 with a love for God and family at Ft. Sanders Hospital on the 26th of January 2021 at 10:35 PM. Tom was born on the 13th of October 1927 in Kingston,... View Obituary & Service Information

The family of Dr. Thomas Wesley Pickel Jr. created this Life Tributes page to make it easy to share your memories.

Send flowers to the Pickel family.