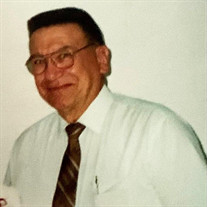 Wilburn Roy Lee, age 89, of Sweetwater, formerly of Knoxville, passed away on Saturday, February 6, 2021, at his home. He attended Beulah Chapel Church, of Niota. A veteran of the U.S. Army. Preceded in death by his parents: Charles and Lena... View Obituary & Service Information

The family of Wilburn Roy Lee created this Life Tributes page to make it easy to share your memories.

Send flowers to the Lee family.