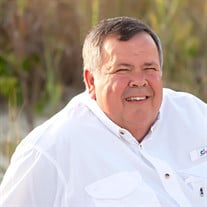 A loving husband, father and grandfather, William (Bill) Loyd Bradberry, Jr. left this earth to join his Heavenly Father on September 10, 2020. He was a man devoted to God, family and country. Born in Duluth, Georgia on February 14, 1948 to parents Claudie and Loyd, he grew up in Dacula, known as Billy, with his three younger siblings making connections with all he encountered. Proudly serving his country in the United States Air Force, he was a life-long supporter of those in the military. He earned his associate’s degree and served as the Student Body President at Truett-McConnell College and obtained his undergraduate degree from Georgia Southern University. After graduating, he was a blessing to many young athletes as a Physical Education teacher and gymnastics coach earning the title of Gwinnett County Teacher of the Year and umpiring a Little League Southern Regional Tournament before making a career change. When he moved to Sweetwater, Tennessee with his wife, Alva Jean Bradberry, in 1976 he quickly became an important member of his new community even though he remained doggedly loyal to his Georgia Bulldogs. He and his wife raised their three children in Sweetwater and he mentored many young men in his role as a baseball coach. With a successful 41-year career at Vestal Manufacturing, Bill held the positions of Traffic Manager, Sales Manager, General Manager of Sales and Purchasing Manager before his retirement in April of this year. He was preceded in death by: infant son Kevin Bradberry, his parents William Loyd Sr. and Claudie Bradberry and grandparents William Washington and Minnie Adline Greeson Bradberry and grandparents Lonnie Edward and Lola Mary Ann Ewing Moore. Bill is survived by his wife of 47 years, Alva Jean Bradberry. His daughter and son-in-law Wendy and Ray Stapleton of Virginia and grandchildren Joshua and Abby. His daughter Jessica Bradberry of Maryville. His son and daughter-in-law Russ and Cambrai Bradberry of Maryville and grandsons Payce, Paxton and Palmer. His brother and sister-in-law, Ricky and Debby Bradberry of Greeneville. His sister and brother-in-law Linda and Marvin Westbrook of Dacula, GA. His sister and brother-in-law Judy and Jimmy Archer of Dacula, GA. Brother-in-law and sisters-in-law: A.J. and Sharon Smith, of Sweetwater, Rebecca Parson, of Nashville, several nieces and nephews. Friends may view from 9:00 A.M. until 5:00 P.M. on Friday, September 18, 2020 at Kyker Funeral Homes, Sweetwater, visitation with the family will be from 5:00 P.M. until 6:00 P.M. A private service will be conducted with Rev. Marvin Westbrook, and Dr. Leonard Markham officiating. A private interment will be conducted in the Edgewood Cemetery, in Knoxville, TN. Memorial donations may be made to St. Jude Children’s Research Hospital 262 Danny Thomas Place, Memphis, TN 38105. Kyker Funeral Homes, Sweetwater, in charge of arrangements. www.kykerfuneralhomes.com

A loving husband, father and grandfather, William (Bill) Loyd Bradberry, Jr. left this earth to join his Heavenly Father on September 10, 2020. He was a man devoted to God, family and country. Born in Duluth, Georgia on February 14, 1948 to... View Obituary & Service Information

The family of William "Bill" Loyd Bradberry Jr. created this Life Tributes page to make it easy to share your memories.

Send flowers to the Bradberry family.