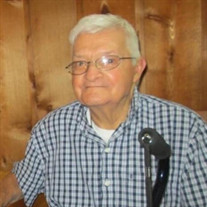 William "Harold" Elmore, 83, a grocer in the Kingston community for fifty years, passed away on Thursday, September 24, 2020. He was born in Crossville, TN on June 5, 1937 to Burris and Effie Draper Elmore. He spent his young life in New Castle, Indiana and Madisonville, Kentucky and returned to Crossville, TN in the late 1940’s, attending Woody School and Cumberland County High School. He graduated from Cumberland County High School class in 1955 and was a U.S. Air Force Veteran. He was of the Christian faith and was a member of a local Baptist church, where he actively attended until a fall in the spring of 2017 left him immobile. Harold was preceded in death by his wife of forty-three years, Katherine Teffeteller Elmore; his daughter, Joyce “Joy” Elmore; his father, Burris Elmore; his mother, Effie Draper Elmore Ramey; stepfather, Theodore “Ted” Roosevelt Ramey; mother- and father-in-law, Addie “Juanita” Lee and Charles “Ray” Teffeteller; sister, Opal Turner; brother, Robert Elmore; half-sister, Joann Ramey; and many stepsiblings. After losing his father to cancer at eight years old, Harold become an advocate for cancer awareness education and adoption. In the mid-1960’s, Harold and his wife searched several adoption agencies throughout East Tennessee looking for the child that they felt most needed a loving family resulting in the adoption of their oldest daughter, Joyce, whom Harold lovingly cared for forty-one years. Three children survive Harold: oldest son, Michael, and twins, Charles and Cheryl. A special nephew, James (Tijuana) Burnette of Harriman and special nieces, Diep (Sam) Bell of Tucson, AZ and Carolyn (Mike) Renfro of Cookeville, TN, as well as many honorary children. Revs. Tony Boswell and Dale Darley will conduct the funeral service, which be held at Kyker Funeral Home in Kingston on Sunday, September 27th at 6:00 pm with special music provided by Tommy Spencer. A receiving of friends will take place from 3:00 pm - 6:00 pm. A graveside service will be held at the Cedar Grove Baptist Church cemetery on Monday, September 28th at 2:00 pm with Rev. Johnny Ward and Kyle Beverley officiating. Kenny Barding, Kent Calfee, Nathan Crowe, Brian Mullins, Michael Earl Russell, and Jim Washam will serve as pallbearers. The family would like to thank those who visited him regularly and the nurses and staff who oversaw his long-term care. Harold’s family would like to extend a special thank you to Jessica, Amanda, and Don at Life Care Center of Morgan County, to Connie Sheldon and Heather Miller at Harriman Care and Rehab, and to Dr. Tim Bell and his Amedisys Hospice team for Harold’s final care. Harold was a man that liked everyone, found the good in every situation, and always put God and others first. In lieu of flowers or memorial donations, please do something with your loved ones, perform an act of kindness, or try to bring a smile to another person. “Love one another.” - John 13:34-35. Kyker Funeral Home of Kingston is serving the Elmore Family.

William "Harold" Elmore, 83, a grocer in the Kingston community for fifty years, passed away on Thursday, September 24, 2020. He was born in Crossville, TN on June 5, 1937 to Burris and Effie Draper Elmore. He spent his young life in New Castle,... View Obituary & Service Information

The family of William Harold Elmore created this Life Tributes page to make it easy to share your memories.

William &quot;Harold&quot; Elmore, 83, a grocer in the Kingston community...

Send flowers to the Elmore family.