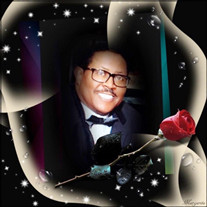 The Journey of our Lifetime Hero! William Michael Henderson, affectionately known as &#8220;Mike&#8221; was born on January 8, 1958, in Sweetwater, TN, to the union of Malcom Henderson and Mary Ratledge. Mary moved to Indianapolis, IN, to make... View Obituary & Service Information

The family of William Michael Henderson created this Life Tributes page to make it easy to share your memories.

The Journey of our Lifetime Hero!

Send flowers to the Henderson family.