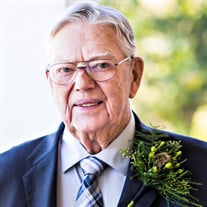 William Davidson Ross age 92 of Harriman passed away Monday, September 7, 2020 at the Methodist Medical Center. He grew up in the Swan Pond United Methodist Church and was active there with his parents. Bill graduated from Harriman High School where he met his future wife Alberta Ahler. In the early 1950’s he built a home on Woolsey Road and was very active in the Swan Pond Community Club and served as the third president. In 1954 Bill began his career at Y12 and became a member of the American Society for non-destructive testing and was president of the organization for one year. He was awarded National ASNT Fellow and remained a lifetime member. In 1956 he became a member of the Harriman Jaycees and held many offices, including President, and chaired many community events. Throughout the 60’s and early 70’s he was an active member of the Harriman Band Aides Association. He chaperoned numerous band trips and band camps. In the early 1970’s he began what would turn into a lifelong membership of the Harriman Lions Club He held every office except treasurer. He was a founding board member of the Babahatchie Community Band, though he did not play an instrument. He was the property and stage manager from inception through 2007. He was a member of the Harriman Garden Club and the Harriman Centennial Committee. He actively participated in the development of the Harriman Historical Museum. Since 1970, Bill was an enthusiastic member of Harriman United Methodist Church where he served as Sunday School Teacher, Sunday School Superintendent, lay representative, choir member, chair of many service committees, sponsor of youth activities, and was a member of the board of trustees. Community members knew Bill as a man who was ready to volunteer his time and energy to make things better for the good of all. He was always ready with a tool in hand to repair a broken latch, set up the sound system or offer wise counsel from a commonsense approach. Bill was preceded in death by his wife of 57 years Alberta Ahler Ross: brothers; J.P. Ross Jr. (Helen), Robert G. Ross (Bettye), Charles Ross and James A. Ross (Jackie). He is survived by daughters and sons in law; Martha and Wally Raisanen, Betsy and Brook Schwepfinger: grandchildren; Julia Tedder (Michael Chance) of Harriman, Rebecca Schwepfinger (Grant Gillis) of Johnson City, Rachel Walker (Taylor) of Kingston, Wendy Raisanen of Phoenix, AZ, Carol Vardeman (Clint) of Hendersonville, NC, Eric Raisanen (Lynne) of Phoenix, AZ: great granddaughters; Emory and Eleanor Tedder of Harriman: brother in law and sisters in law; A. Julian Ahler (Margo) of Kingston and Joann Ross of Palm Harbor, FL: many nieces, nephews, cousins and special caregiver Daniel Marchman. The Ross Family will be holding a memorial service at a later date. Memorials may be made to Harriman United Methodist Church.

William Davidson Ross age 92 of Harriman passed away Monday, September 7, 2020 at the Methodist Medical Center. He grew up in the Swan Pond United Methodist Church and was active there with his parents. Bill graduated from Harriman High School... View Obituary & Service Information

The family of William Davidson Ross created this Life Tributes page to make it easy to share your memories.

Send flowers to the Ross family.